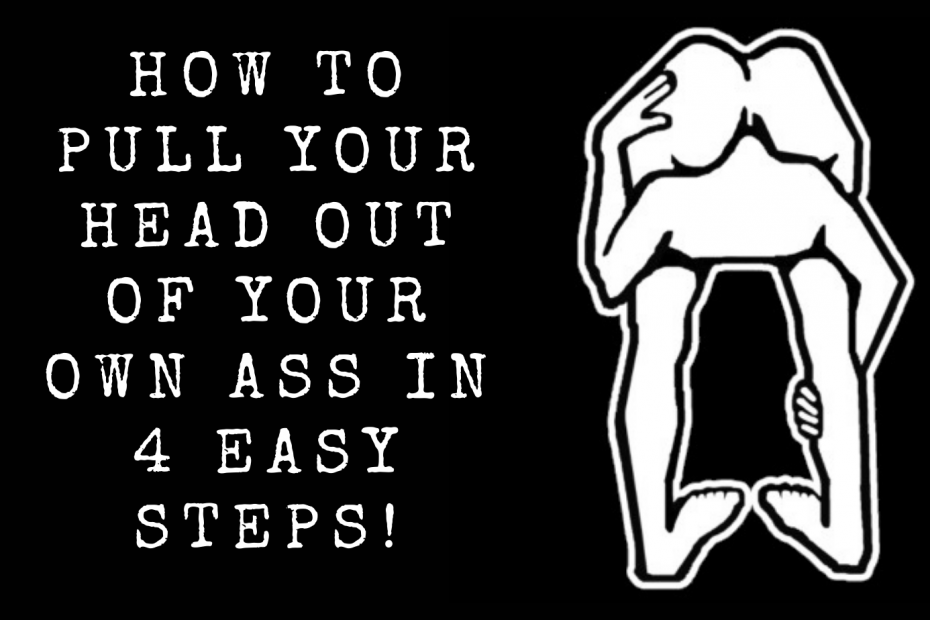 I was prettymuch a total loser for a long time, so trust me here. I speak from experience: It takes a hell of a lot more mental and emotional energy to be a stubborn failure, a determined victim, and an excuse spinner, than it does to do the work of making yourself a success. (However you may define that term. )

Moving from failure to success requires only four simple steps:

Step 1: Recognize that your head is in your ass, and you’re the one that put it there. No one else did, you did. Bad things happened. Life didn’t go according to plan. You experienced betrayals, hurts, unfairness, and so on. But then you retreated from it all by inserting your head into your ass. Soon you told yourself and began to actually believe that all those terrible things is what caused your head to end up there.

Hey, I’m not judging. Well, I kinda am. But as my head was deep into my own ass for a long time I’m including myself in the judgment. My then-self, at least.

But facts are facts. And correlation is not causality. Your head is in your ass now because you put it there. Owning that is the beginning of freedom from head-in-assness.

WARNING: Refuse the temptation to beat yourself up for having put your head in your ass. Self-recrimination will only serve to make your head slide even deeper into your ass. Instead, forgive yourself. You’re only human, after all. Humans put their heads in their asses at times. It happens.

Step 2: Realize that it’s no one’s job but your own to pull your head out of your ass. It’s not the job of your parents, politicians, or the government. It’s not even God’s job, assuming you believe in God.

No one is coming on a white horse to rescue your head from your ass.

Step 4: Now that your head has been liberated from the tyrannic bondage of your ass, take a deep breath. Wash up and maybe have a sandwich. But then promptly get to work on creating a fantastic life. One now forever free of head-in-assery.

Eventually, you’ll even learn to be grateful for the time you spent with your head in your own ass because, by comparison, working to become successful is a breeze. Was mich nicht umbringt macht mich stärker, said Nietzsche. What does not kill me makes me stronger.

It applies to asses too.