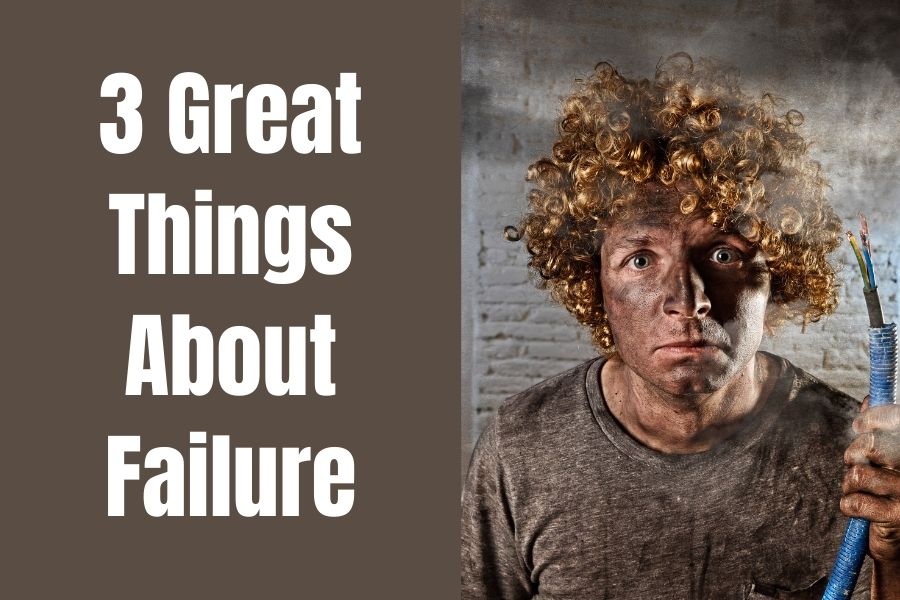 Failure is an essential ingredient of success. That may sound counterintuitive, but it’s true. No one becomes successful without practice, and “practice” is just another way of saying, “failing deliberately, forward.” So if you want to succeed, you must be prepared to fail . . . and fail often.

While failing may not feel enjoyable, we can still dull its edge and extract some good from it, which will help us move beyond it to success more quickly. We already found one way to do just that, by reminding ourselves that failure is essential to success. Here are three more great things about failure.

There’s a famous story about Thomas Edison who, when struggling to invent a viable lightbulb, was asked about his many failures. His response was indignant: “I have not failed, not once! I’ve discovered ten thousand ways that don’t work.”

Edison didn’t see his thousands of experiments as failures, but as steps to success. Because that’s precisely what they were. Each yielding a new insight into what worked and just as importantly what didn’t work. Each a lesson in refinement, each pointing the way towards the ultimate goal. All of this adds up to innovation.

Another example comes from alexander Fleming who discovered penicillin by mistake. Forgetting normal laboratory procedure, he left petri dishes unattended for two weeks. Fungi colonized them and, wala!, upwards 80-200 million lives and counting have now been saved by his screw up.

We’ve all forgotten things in the fridge. But on this occasion that mistake and failure led to one of the most revolutionary contributions to modern medicine.

Every failure is a lesson begging to be learned. We may not always enjoy the lesson, but if we choose to ignore it then we’re just adding an insult of stupidity to the injury of error.

Going back to Edison and his lightbulbs. Imagine if he didn’t try to learn anything from each failed experiment? If with every experiment he just tried a completely random approach, he’d likely never have succeeded. And if with each experiment he doubled down on his original idea and just tried the same bulb design over and over again, he definitely wouldn’t have succeeded.

But all too often we do both of these things with our failures. Instead of pausing to look for the lesson in them, we immediately renew our efforts with the vague hope that ‘it will be different this time.’ Or worse, with a stubborn resolve to make OUR way work, confusing the method with the goal (Anyone who has ever stuck to a diet that wasn’t working knows this one!).

So, look for the lessons in failure. By doing so you’ll achieve success far more quickly.

Think about it: Much of failure’s bite comes from fearing that we will fail again. We know intellectually that failure is rarely ever final. But we every failure is painful, and we naturally want to avoid pain.

The bad news is that if we refuse to try and try again for fear of pain and pain again, we really will fail. Because–as we already learned–failure is practice, and practice is essential to success.

The good news is that we’re wrong about the pain. We imagine that each time we fail the pain will be just as bad, or even worse. In reality it doesn’t seem to work that way (thank God).

You struggle and sacrifice to build your first business and just when you’re starting to break through . . . some big, fat FAIL comes out of nowhere to knock you down. The market turns, the government passes some asinine regulation, covid happens. It’s devastating. It hurts. But, you’ve read enough blog posts like this one to know that you need to learn from the fail, get back up, dust yourself off, and start again.

You make some progress and then. Bam! Another fail. It too is devastating. And it hurts . . . but not quite so much this time. This all looks and feels weirdly familiar. But at least now you know you can survive it.

Then another fail. Frustrating but not so devastating, it hurts but you’ve been here before so it doesn’t hurt quite so much. And you feel more confident in your ability to recover this time.

And the fails continue coming. But because you’re innovating and learning from each fail, they are less disruptive and you recover more quickly each time. Before long the fails no longer phase you much, if at all. Why? Because you’re now mentally prepared for them, viewing them as just par for the course of achievement.

Plus, you know from experience that you have what it takes to weather anything that’s throw your way. You’re not just resilient, you’re like a weathered old sea dog who can steer into hurricanes without breaking a sweat. ‘Argh! Tis only a breeze and some drizzle.’

And when you’re a weathered old sea dog who can steer into hurricanes without breaking a sweat . . . no failure can stop you, and success is guaranteed.